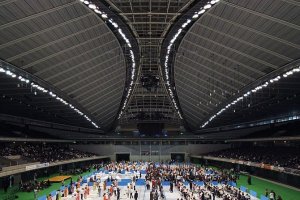 The venue for the gymnastics and water polo competitions during the 1964 Tokyo Olympics, the Tokyo Metropolitan Gymnasium continues to be an important sporting facility for the city today. It will host the table tennis competition during the 2020 Olympic and Paralympic Games.

Several facilities are currently closed due to preparations for the 2020 Tokyo Olympic and Paralympic Games – please confirm on the official site before visiting.

The site has an interesting history. It was once owned by Iemasa Tokugawa (1884 to 1963), a politician and diplomat, and the 17th hereditary head of the famous Tokugawa shogunal family. The Tokyo government purchased the land and buildings in 1943, it was then used by US military officers for some years following the Second World War. After the site passed back into the hands of the Tokyo government in 1952, all the former wooden buildings were torn down and a modern concrete gymnasium was finished in 1956.

The facility underwent a complete renovation between 1986 and 1990 and the city has continued to make additions and improvements over the years. The main arena can seat up to 10,000 people. The gymnasium has hosted both national and international sporting competitions in diverse sports, such as volleyball, wrestling, and figure skating. Since 2000, the arena has also been used for concerts and Katy Perry performed there in 2015.

A new kind of system for managing the gymnasium was instigated by the Tokyo government in 2006, with Tokyo Sport Benefits Corporation being the current designated manager. Some of the facilities, including the swimming pool, training room, and athletic fields are usually open for use by the public. However, please note these are currently closed due to preparations for the 2020 Tokyo Olympic and Paralympic Games.

Your experience helps others planning their trip

Located right next to the vast Shinjuku Central Park, THE KNOT TOKYO Shinjuku is a modern boutique hotel with convenient access to nearby Shinjuku Station..

The Toyosu Market is a wholesale market in Tokyo, located in the Toyosu area of the Kōtō ward. There are two buildings for seafood and one for fruit..

Olympic fever is building in Tokyo! Preparations for the 2020 Olympic and Paralympic Games are well underway. One of the most important venues will be..

This huge park in the heart of Tokyo is known for its various sports facilities. However, it also offers many other attractions for visitors of all ages...

Shinjuku Gyoen is one of the largest and most popular public gardens in Tokyo. Located a short walk from the popular Shinjuku neighborhood, the park is..

Is this your listing?

Own or manage this property?